Bank of America has long insisted that it's not sweating the exposure of its internal operations that Wikileaks' founder Julian Assange promised in interviews last year, an exposure that just might bring the financial giant to its knees (or not -- nobody on the outside knows what Wikileaks is holding).

But internal emails from a cyber-security firm paint a very different picture. BofA officials were sufficiently worried about the potential revelations to have a law-firm it retained develop a plan to discredit and disrupt Wikileaks through a variety of nefarious means.


The emails, from HBGary Federal, were made public after the company obtained the names of several members of the hackers' group known as Anonymous, and the latter retaliated. (One should not mess with hackers, at least if one doesn't want his or her dirty laundry aired in public.)

The story, which reads like a cheap cyber-thriller, comes to us from Tech Herald, via Digby. It begins with Assange's November 29 claim that Wikileaks would "take down" a major bank. On November 30, BofA officials held a late-night conference call trying to figure out "how to get the jump on WikiLeaks." They set up a meeting with the law firm of Hunton and Williams, which asked the data security firms to come up with a plan. Here are some bits from Tech Herald's write-up


The proposal starts with an overview of WikiLeaks, including some history and employee statistics. From there it moves into a profile of Julian Assange and an organizational chart. The chart lists several people, including volunteers and actual staff.

One of those listed as a volunteer, Salon.com columnist, Glenn Greenwald, was singled out by the proposal. Greenwald, previously a constitutional law and civil rights litigator in New York, has been a vocal supporter of Bradley Manning, who is alleged to have given diplomatic cables and other government information to WikiLeaks. He has yet to be charged in the matter.

Greenwald became a household name in December when he reported on the “inhumane conditions” of Bradley Manning’s confinement at the Marine brig in Quantico, Virginia. Since that report, Greenwald has reported on WikiLeaks and Manning several times.

“Glenn was critical in the Amazon to OVH transition,” the proposal says, referencing the hosting switch WikiLeaks was forced to make after political pressure caused Amazon to drop their domain. 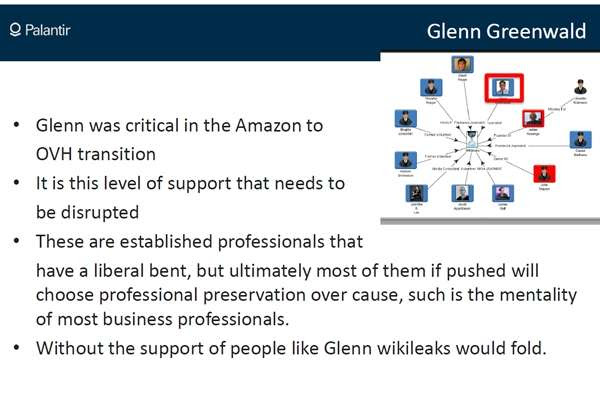 [Earlier drafts of the proposal and an email from Aaron Barr used the word "attacked" over "disrupted" when discussing the level of support.]

“Despite the publicity, WikiLeaks is NOT in a healthy position right now,” an early draft of the proposal noted. “Their weakness [sic] are causing great stress in the organization which can be capitalized on.”

Some of the things mentioned as potential proactive tactics include feeding the fuel between the feuding groups, disinformation, creating messages around actions to sabotage or discredit the opposing organization, and submitting fake documents to WikiLeaks and then calling out the error.

“Create concern over the security of the infrastructure. Create exposure stories. If the process is believed to not be secure they are done. Cyber attacks against the infrastructure to get data on document submitters. This would kill the project. Since the servers are now in Sweden and France putting a team together to get access is more straightforward.”

Digby added that "one part [of the scheme] certainly worked: the media lemmings all ran toward the shiny object without even considering the effect on their own profession and its alleged mission to expose the truth."


I would wonder if the "professional pressure" they planned to exert on supporters was brought to bear on some of the most powerful journalists in the country who seemed to be offended by the very idea that governments and wealthy institutions should have their lies exposed to the public, but sadly, I doubt it. Those people clearly behaved instinctively, siding with the powerful with whom they identify. The governing elites have nothing to fear from the mainstream press.