Mosque foes recently started a boycott of Bieber after he made comments in support of the mosque project in an interview with Tiger Beat, a teen fan magazine, Sullivan told WYNC earlier this month. Now, his eight-year-old daughter and 11-year-old son have been banned from attending Bieber performances.

"I informed them, 'Hey guys, guess what? Justin Bieber spoke out for the ground zero mosque," Sullivan explained to Salon in an interview. "My little girl took down his poster and said she didn't want to have nothing to do with him any more. These are my kids, they're living this thing."

Read the whole thing -- worth your while.

Posted by Joshua Holland at 10:27 AM No comments:

Great Titles in Literature, Optimized for the Intertubes

Like everyone else in online publishing, at AlterNet we obsess about getting content picked up by your searches.
And I can say that this, over at McSweeney's, is just perfect:

The 11 Stupidest Things Phonies Do To Ruin The World

Are Anti-Miscegenation Laws in Israel's Future?

Last year, NPR did a report about gangs of anti-miscegenation vigilantes roaming around Israel ostensibly protecting the honor of Jewish maidens:

There is a new enemy for some Israelis: Romance between Jewish women and Arab men, and vigilantes have banded together to fight it. The vigilante groups are walking the streets and towns across Israel. The largest and most notorious is in the Jewish settlements that have sprung up in and around traditionally Arab East Jerusalem. Sheera Frenkel joined one of the groups on patrol.SHEERA FRENKEL: The small, white hatchback swings into a nearly deserted parking lot and does a quick look around. It's just after 10:00 at night, and the lot is clearly a prime destination for a teenage date night in the settlement of Pisgat Ze'ev. But David, a 31-year-old who lives here, is out for a different kind of prowl.DAVID: (Through translator) Go down to that parking center. Stop, stop, one minute. That's them over there. Check if there is a Jewish girl in that car over there.FRENKEL: Every night, David, who asked not to be called by his real name, patrols this and other neighboring Jewish settlements. His mission is to find Arab-Jewish couples and break up their dates.DAVID: (Through translator) My heart hurts every time I see a Jewish girl with an Arab. It's extremely upsetting. I asked myself: How did we get to this situation? How did we descend to this level? It is a serious step backwards, in our eyes.

The letter issued by leading rabbis' wives urging Jewish women to avoid contact with Arab men was thought up and executed within no more than 48 hours. "We thought it up the day before yesterday and were already working on it by Tuesday," said the letter's initiator, Anat Gofstein of the Lehava organization. "All the rabbis' wives were incredibly receptive to the idea. I only had to mention the assimilation phenomenon and they all signed."

Talking to Ynet, Gofstein said there was overwhelming agreement among the rabbis' wives when it came to the assimilation issue. "We talked about how close to home this issue is and it was obvious the trend had only grown further," she stated.

Gofstein claimed that assimilation had reached religious girls' high schools and seminaries. "We engage in the girls' rehabilitation after they emerge wounded and battered from the Arab villages," she said.

"We are interested in boosting prevention. The phenomenon must be stopped instead of waiting for the girls to remain in the villages making it harder to pull them out of Arab culture."

One of the rabbis' wives who signed the letter addressed the issue of whether the letter increases antagonism towards religion. "I don't understand what this antagonism you speak of," she told Ynet.

"Separatism is what sustained the Jewish people throughout time. It's our distinction. We are not out to cause uproar, we are here to raise a very painful issue. And yes, very painful matters need to be discussed openly. Who better to talk to the girls than the rabbis' wives?"

Given the ascendance of the religious right in Israel -- and the increasingly anti-democratic bent of the government -- can old-fashioned anti-miscegenation laws be far behind?
Posted by Joshua Holland at 2:07 PM 3 comments:

Matt Duss flagged this via email:

[Despite having] strong negative feelings and suspicions, Americans are still not in favor of any type of military engagement or intervention with Iran. In fact, the most frequent option Americans recommend to deal with Iran is engaging in diplomatic negotiations (30%, up slightly from 26% in January 2010), followed by economic sanctions (20%).
Only five per cent of respondents would do nothing, claiming that Iran poses no threat to the world.Across the country, 16 per cent of Americans would consent to launching military strikes to destroy Iran’s nuclear facilities, and seven per cent would authorize a full-scale invasion of Iran and removing the current government.

Given the Palination of today's GOP, this next bit should come as no surprise:

There are some striking differences when party allegiance is taken into consideration. More than half of Democrats would rely on negotiations and sanctions to deal with Iran (56%), while two-in-five Republicans (40%) would prefer to launch strikes or authorize an invasion. Independents are more likely to choose diplomacy and sanctions (52%) than air strikes or an invasion (19%).

Posted by Joshua Holland at 12:26 PM No comments:

Study: Conservatives Have Over-Developed "Fear Center" in Their "Brains"

There have been a number of studies looking at the differences between how conservatives and other folks process information -- examining our political divide from a cognitive perspective.

But as we all know, the line between nature and nurture is a fuzzy one...

Political opinions are considered choices, and in Western democracies the right to choose one's opinions -- freedom of conscience -- is considered sacrosanct.

But recent studies suggest that our brains and genes may be a major determining factor in the views we hold.

If the study is confirmed, it could give us the first medical explanation for why conservatives tend to be more receptive to threats of terrorism, for example, than liberals. And it may help to explain why conservatives like to plan based on the worst-case scenario, while liberals tend towards rosier outlooks.

That was written by Daniel Tencer at Raw Story.
Posted by Joshua Holland at 11:44 AM 2 comments:

Dad flew in from New York and we went up to Napa for a few days. Hit the rental counter, but they were all out of the crappy subcompacts I'd reserved. They only had this cherry-red Mustang convertible left: 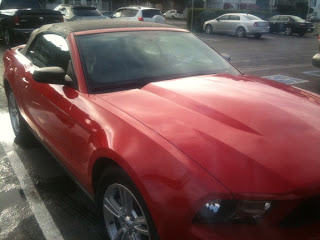 So very, very sad.
Posted by Joshua Holland at 9:49 AM No comments: